Coda 2 (Previously, just Coda) has been my "daily driver" suite for web development for around 4 years now. It's an absolutely wonderful editor by Panic, and well worth the price tag in my opinion. It has an editor, (s)ftp client, git client, terminal, mysql database manager, and a whole lot more all in one package.

I wanted to remove some of the manual steps, and use Git (I use Bitbucket) for version control. So, here's how to do that in Coda 2! This is based on the assumption you already have a site started, if you're starting from scratch it would be the same procedure, though. I'll also assume you're familiar with at least the basics of using a posix (unix/linux) command line.

Set up a Local Git Repo for the Drupal site

I'll admit I'm not great at using command line git, and have usually stuck with using graphical clients such as Gitbox. But I promise, after this initial setup you can stick with the same tools!

First, in a terminal, change directory to your site's main folder. This would be it's directory in the drupal Sites folder, that's typically named after your domain. I'll be using this blog's setup as an example. We will first create a .gitignore file so items that don't need to be tracked (such as configuration and temporary files) won't be. My .gitignore typically looks like:

Settings.php is the crucial thing here, you don't want your database password out there! Now that it is being kept secret, we can create the local git repo:

This created a basic git repo based in the current directory.

Tell git that this project's origin (or master repository, so to speak) is located on Bitbucket. Substituting Github or another git host is doable.

git push -u origin --all

Transfer the commit we just made to the origin, aka Bitbucket.

Great! Now we have a local Git repository and a master one on a hosted Git service.

Set up Coda 2 to use our repos

The Coda setup is pretty typical. You want to set Local Root to the same directory where we just made a local repository, though. 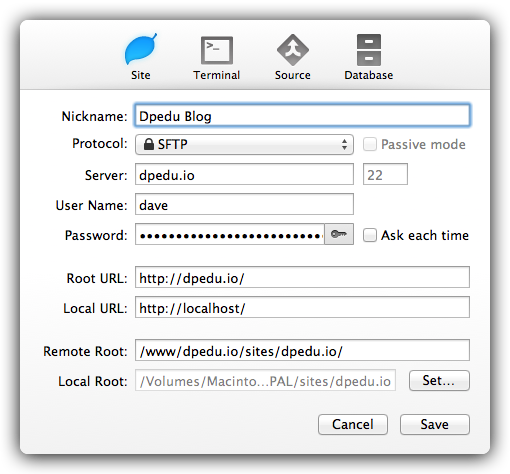 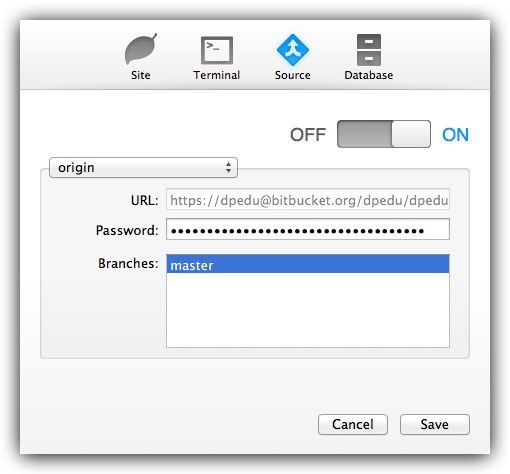 On this screen, you'll only need to change Off to On, select origin in the dropdown, and put your Bitbucket password in the password field. Coda should automatically know the git URL, as it's saved in the repo's metdata.

Great! You can save this profile and get to work!

Once you open up the profile we just created, you'll see the local filesystem and remote filesystem within Coda. I like to use the righthand sidebar for just about everything. The files tab shows your theme files, the version control tab (Coda calls it "SCM") is used for working with git, and the publishing tab is used for pushing your local files to the remote server. You can set up git hooks to do this pushing automatically, but I prefer not to when working with Drupal.

After you save changes to a file in Coda, it will be listed in the version control and publishing tab, along with a counter the number of files changed can be seen at a glance.

Right clicking on the file reveals options to:

Adding & Committing it work exactly how you would think. At the bottom of this sidebar is the button to push any local commits to the origin (Bitbucket hosted) repo.

Once you select this, your committed changes are moved to bitbucket!

Cool! Your development setup is now fully integrated with git. Want to push your local version to the remote web server, configured when settng up the site profile in Coda? The publishing tab has the option to Publish All, which uploads any changed files.

We all know drupal heavily relies on it's database for all of it's content, and probably far too much configuration. Moving your local database to a live server can be a bit of a pain, so here's a little script I use to help make it easier:

Neat! So what does this do?

So now your local install is perfectly mirrored, within seconds.

Found this useful? Have a better setup? Brag about it in the comments.

I realize this post is a year old, and I'm not sure whether you even use this script anymore, but I thought I'd mention a couple of optimizations that might help out anyone else using it. Sed accepts multiple commands in a single invocation, so you can eliminate one tempfile by combining the two sed commands into one call: sed -e '/^INSERT_INTO `drupal_cache/d;/^INSERT_INTO `drupal_watchdog`/d;' < dump_raw.sql > dump.sql However, thanks to the power of regular expressions, this could even be combined into a single regexp that matches both lines of interest: sed -e '/^INSERT_INTO `drupal_\(cache\|watchdog`\)/d;' < dump_raw.sql > dump.sql Either of these forms will significantly speed up the processing on large dumps, because it will only have to scan through the entire file once. I'm not sure whether there's anything to argue one form over the other, my suspicion is that sed's regexp processing is optimized well enough to make the differences negligible. By the same token, here-docs let us use cat to replace all three of those echo statements: cat >> dump.sql << '__EOF__' UPDATE `drupal_variable` SET `value`='s:27:\"sites/dpedu.io/privatefiles\";' WHERE `name`='file_private_path'; UPDATE `drupal_variable` SET `value`='s:20:\"sites/dpedu.io/files\";' WHERE `name`='file_public_path'; UPDATE `drupal_variable` SET `value`='s:4:\"/tmp\";' WHERE `name`='file_temporary_path'; __EOF__ (The single-quotes around the here-doc terminator ('__EOF__') cause the entire here-doc to be interpreted as if it's wrapped in single quotes, which eliminates the need for all of that tedious escaping.) The preview formatting on the comments here makes me think that the code above is going to be pretty mangled when it posts, so just in case I also threw all of this into a public gist, which can be found here: https://gist.github.com/ferdnyc/22d10303bb5df398434f
Submitted by FeRD (Frank Dana) (not verified) on Thu, 05/21/2015 - 21:01